How fast do you want to go? Moderately fast or super fast? Many of us car enthusiasts have that thing for performance cars. It’s a beauty to watch a fast car zoom by, it’s even more of a blissful experience to be in the driver seat. It is heavenly! But sometimes, when we imagine ourselves driving fast cars, it stops there – imagination! Because fast cars are pricy – or used to be.

If you love fast cars, like we do, and don’t have a fat budget to get a fiery Lambo or a lightning Ferrari, this article about the fastest cars under 30k would interest you. Here, we’ve brought together the finest, fastest cars at an affordable price. You don’t have to imagine speed anymore, you can be in the driver’s seat calling the shots.

What are the fastest cars under 30k? 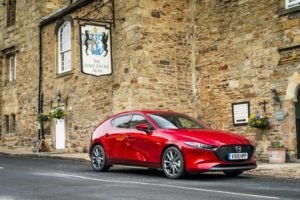 If you had to race against time to get to an appointment, you’d be lucky to have a Mazda 3 in your driveway. Its 2.5-litre four-cylinder engine supplies 184 horsepower and can go really fast. The Mazda 3 hits 60 mph in about 6.8 seconds, that’s faster than most cars in its class. With this going for the 3, it easily makes it into our fastest cars under 30k list. 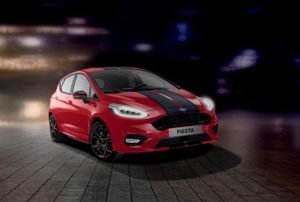 Of all the models of the Ford Fiesta, the ST-Line hatchback stands tall when it comes to performance and speed. It is backed by a supercharged 1.6-litre four-cylinder engine that produces a whopping 197 horsepower and 202 lb-ft of torque. Extra features like the very responsive steering, upgraded brakes, and sport-inclined suspension make driving at high speeds easy and safe with the ST. It legitimately earns a spot on our list of the fastest cars under 30k. 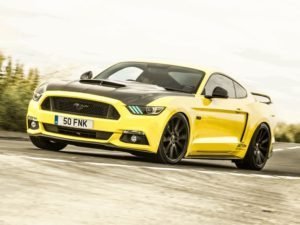 This American performance heavyweight continues to defy the competition and shoot for the highest pedestal as a muscle car. This Mustang boasts an incredible 3.7-litre V6 engine that delivers 300 hp and 280 lb-ft of torque. It’s an absolute monster on the track. And that’s just the base V6 model, you’d be amazed at the 435 hp the GT trim offers. To fit our price point as one of the fastest cars under 30k, you’d have an easier time getting a used Mustang (like most others on this list). Small frame, sharp handling, turbocharged engine, certainly ideal for our round-up of the fastest cars under 30k. For about 26,000 CAD or less, you can get this car with its 1.4-litre turbocharged engine that churns out an impressive 160 horsepower. Due to its size, not many people would think its got the drive – until you hit the road with it. Worth buying. 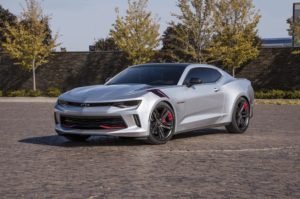 If you don’t care too much about a small trunk space or cramped back seats, then you’d probably love the Camaro. After all, you’re interested in the fastest cars under 30k, not the roomiest or most comfortable ones. In addition to its over 300 horsepower and automatic transmission (depending on the model), it’s got very impressive and responsive handling you’d absolutely appreciate.

You know, there are cars nobody finds interesting enough to stare at. Such cars are only good for driving and parking and repeat. But not the Honda Civic SI, it’s a fantastically styled car and that’s not all there is to love about this Civic. This SI model comes with a turbocharged 1.5-litre fuel-sipping engine that makes 205 hp with ease. 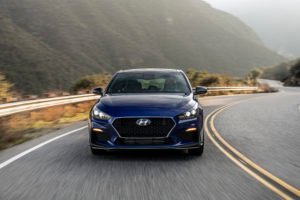 Hyundai has a reputation for packing loads of standard features into their cars and offering the full package for a bargain price. This Elantra is not exempt. And it’s got plenty of cargo space to go with it. And to the elephant in the room, the N-Line’s turbocharged 1.6-litre engine, 201 horsepower, with a six-speed manual (or optional seven-speed automatic) earns it a place on our fastest cars under 30k list. 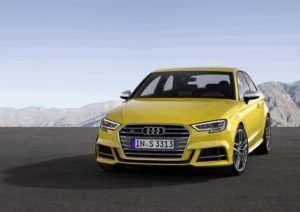 A new 2020 Audi S3 costs 60,000 CAD or more and features a turbocharged 2.0-litre engine that produces 288 hp. Here is the interesting part, a 2016 Audi S3 comes with a turbocharged 2.0-litre engine and 292 hp. Amazing! This shows that new models aren’t exactly better than older ones. What’s more? You can get it under 30k. The Audi S3’s interior styling is also fantastic. Looking for a car that has lots of power and pride? We present to you America’s iconic Corvette. It’s brash, good-looking, and sophisticated at the same time. We’re going back to the 2012 model because the more recent ones are definitely not under 30k. With 430 horses powering this baby, it more than earns its place as one of the fastest cars under 30k. 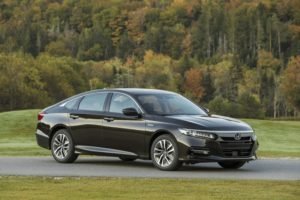 The Honda Accord is a fav any time, any day. It’s one of those cars many people love to drive for many reasons. One of those reasons is its powerful engines that produce up to 192 horsepower. This comes standard on the LX and EX trims but if you want something more, opt for the Sport, EX-L or Touring trims – these come with a turbocharged 2.0-litre with 252 hp. 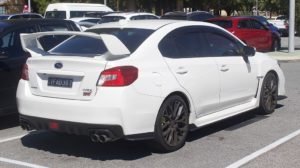 A car with a racing history, a very good one at that. The Impreza is optimized for performance and it delivers overwhelmingly. The WRX STI trim is the go-to if you want more power when you crank the engine. It delivers 305 horsepower and 290 lb-ft of torque. Its standard AWD guarantees better traction on the asphalt. Subaru Impreza WRX is undeniably one of the fastest cars under 30k. This Ford Focus has its sights on more speed and overall performance. It’s an upgrade to the Ford Fiesta ST, and the changes are not only noticeable in its performance but also its sleek interior design. The 2.0-litre turbocharged engine generates a staggering 252 horsepower and 270 lb-ft of torque. The generated power is sent to the front wheels via a six-speed manual transmission. 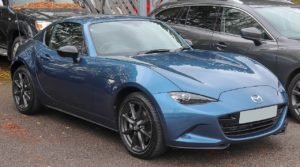 The Miata is a sports car that’s unique and makes for an enjoyable ride. A two-seater, not much room in the trunk or over-the-top features but it does have the performance we are interested in. After all, it’s a sports car. You can get up to 181 horses and 151 pound-feet of torque out of it. It’s fuel-efficient and good handling and comfort are guaranteed, thanks to its telescoping steering wheel.

Volkswagen’s Golf GTI has a lot going for it in terms of performance and style. It’s a practical, hot-hatchback. The 2.0L turbocharged engine offers 220 horsepower and can be paired with a six-speed manual or automatic transmission (dual-clutch, that is). The S trim is good, but you might want to consider the mid-level SE trim for more features like LED headlights, keyless entry, and satellite radio. 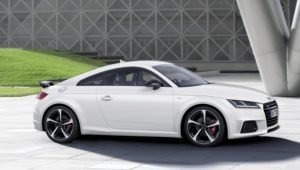 With the capacity to produce 220 horsepower and 258 pound-feet of torque, Audi TT Quattro is a worthy addition to the fastest cars under 30k. It has a record 0-60mph score of 5.3 seconds and can reach speeds up to 140 mph. All-wheel drive comes standard and driving experience behind the wheel is top-notch. This car is offered in only one trim but comes in two body styles, coupe and a two-seater convertible. Surely, one of the Cs should do it for you, 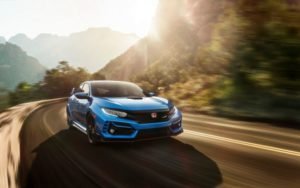 A Honda Civic car on the fastest cars under 30k list. Who saw that coming? With this entry, Honda re-affirms its drive to make cars that appeal to everyone. It’s got a turbocharged 2.0L monster under its hood that makes 306 horsepower with the aid of a six-speed manual transmission. Type R gets upgrades in the tires, brakes, suspension, to keep up with its huge performance. You can hit the 60mph mark in 4.9 seconds.

Upgrade after upgrades have helped the Subaru BRZ look more and feel more like a better car than its twin, Toyota 86. For the 2018 model, this easy-to-drive coupe Limited trim adds Android Auto, Apple CarPlay, and a 7-inch touchscreen. You can crank out 205 horsepower from its all-trim designated 2.0L four popper engine. 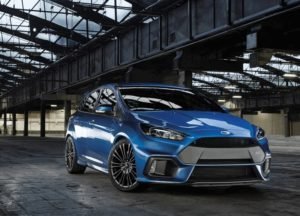 Now out of production but still very relevant, so much to feature in our list of fastest cars under 30k. Don’t pay much attention to its age, this car has got many things going for it: A fantastic grip, stylishly built interior, a powerful turbo engine, and all-wheel drive. The beast under the hood spits an amazing 350 horsepower. This car is indeed a hot-hatch. 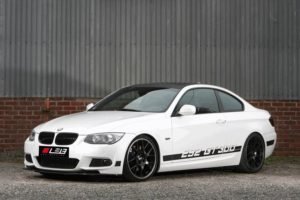 If you’ve not got the cheddar to snag a 2018 BMW M3 that goes for nothing less than 70,000 CAD, here’s a more affordable option. There’s no reason why you can’t buy old vehicles, so long as they give you what you want. This 2013 M3 is an iconic bimmer. It offers a sublime driving experience and is as practical a car as recent top brand models. Peep its naturally aspirated 4.0L V8 that cranks out 414 hp and you’re won over. 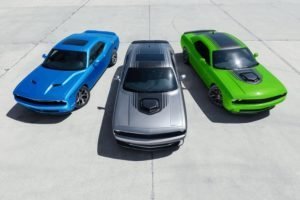 Last but certainly not least, the Challenger is always up for any challenge where “fastest” or “speed” is concerned. This car has a potpourri of entertainment, safety, and performance features that make it awesome. The R/T trim comes with a 392hp V8 engine that allows for a top-notch driving experience. The upper SRT trim adds a supercharged V8.

That’s it! Which is your favourite? Which would you love to own/drive? Do share.